Welcome to Potts Lawyers Recent News. Where Bill Potts, our founding director provides you with the latest law commentary on contemporary and trending issues. We are here to help law students, those in the law profession and the general public with an insight into the latest law news around the nation.

This month, Bill highlight’s the growing concerns within the legal profession about the length of time that it is currently taking for trial listings in the Southport Courthouse.

Criminal lawyer weighs in on effectiveness of ankle bracelets

The effectiveness of ankle bracelets is the topic of this interview with Luke Bradnam on 4BC radio. Bill explains the limitations of ankle bracelets and the problems which often give rise to criminal behaviours in young people. Bill acknowledges the legitimate concerns and personal impact of victims and highlights the appropriate action taken  by the courts which include, with young offenders, rehabilitation measures aimed at avoiding further offending.

The government recently announced as part of its package to deal with youth justice issues.

A range of responses broadly issues related to bail, and to allow a trial scheme to enable youth offenders to have GPS trackers placed upon their ankles. This we were told would have the effect of preventing crime. It also was said that the public could be satisfied that the government was doing practical steps to protect the public from youth crime. The statistics can be found in the first reading speech of Mark Ryan the Queensland Police Minister, what he said in that speech to Parliament was “90% of children who are placed on bail, do not offend whilst on bail”.

That the purpose of bail, which is to keep people in the community on a license, to ensure they do not commit offenses, to harm themselves, harm others, flee the jurisdiction, actually works. However, in a small percentage something just short of 10% that are charged with something like 48% of the offending.

The gold coast is the fastest-growing city in Australia, yet we seem to be treated as the second cousin to Brisbane.

What is missing on the Gold Coast, Southport is the social infrastructure of a Court House not just for the present, but for the next 20 years. If you do not have a vision, if you do not plan, you plan to fail. An in a particular case such as this, what is needed is this building which will incorporate not mealy state courts such as say Supreme Court and expanded District Court. But a Federal Court, to encompass both Family Court and Federal Court matters but also and most importantly QCAT which is an expanding jurisdiction, a low-cost jurisdiction, is important also to be housed. Such a building could effectively be a legal hub for the entire Gold Coast, and in this particular case would be a significant advantage to victims of crime, defendants, police, prosecutions, to ordinary Gold Coasters. We deserve to have such infrastructure within our community. 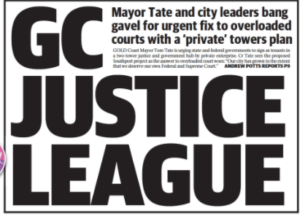 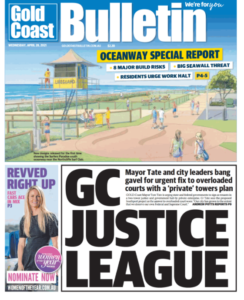 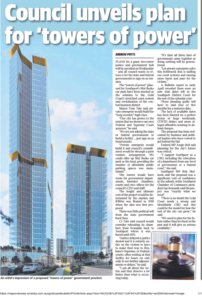 There are growing concerns within the legal profession about the length of time it is taking for trial listings in the Southport Courthouse. Bill Potts, Director at Potts Lawyers, states that one contributing factor is the recent legislative changes to maximum penalties for certain criminal offences, which has meant that more accused people seek to defend against allegations. Other members of the profession highlight resourcing difficulties and too few courtrooms and judges to service the Gold Coast area. Chief Judge Brian Devereaux has indicated that the Southport case load and court date availability is similar to that in Brisbane or other regional courthouses. COVID-19 had also impacted the way trials are run and limits the availability of courtrooms. Trial delays not only impact defendants and their ability to have the certainty of a decision, but also the complainant’s closure, as well as witness’ recall when there is delay between the alleged events and their giving evidence in Court. 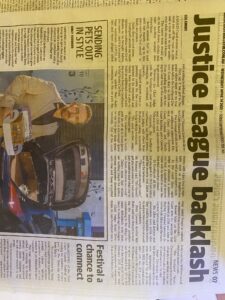 Potts Lawyers is Queensland’s largest private criminal law firm with a combined experience of over 100 years. We appear in all criminal and traffic matters in all courts throughout the State. And as a founding member of the Australian Defence Lawyers Alliance we have the resources to advise on complex national and corporate crime matters. If you are up against it, we provide strategic advice and effective representation to achieve the best possible outcome… when we make a stand for you.