Our criminal lawyers are very experienced in representing clients facing charges of assaults and other types of violence. We are Queensland’s largest private criminal law firm and have consistently placed in the prestigious Doyle’s Guide to the Legal Profession. So, you can be confident that you will receive the best advice.

This page will provide some guidance if you have been charged with a violence related offence. At the bottom, you will find links to specific offences. Everyone’s circumstances are different however, and to obtain specific advice, you should call our team on 07 5532 3133.

I have just been charged. What should I do?

In Queensland, you are obliged to provide the police with your name, date of birth and address. You may be also required to provide identification to demonstrate what you have provided them is correct, and may also be served with a notice requiring you to attend a police station to provide identifying particulars such as you fingerprints.

Beyond this, you have a right to silence. In the vast majority of cases, you should exercise this right until you obtain legal advice, as there is no such thing as an “off the record” statement. Anything you say to police could be held against you in court. Even if you are innocent and trying to be truthful, a mistaken statement could be used to discredit your credibility. Moreover, even if everything you state is correct, it could still limit the defences you have available.

I am innocent and want to tell the police my side of the story. Why should I remain silent?

The police are not judges or juries. Their job, in this context, is to obtain evidence which can be used by the prosecution in support of a charge against you. They are not working in your interests.

Additionally, subject to a few exceptions, anything you say during your interview which is beneficial to you is generally not admissible as evidence in court. On the other hand, anything you say which the police believe could be used to support the charges, will generally be admissible. Hence, there is a great risk in talking to police, with perhaps little to no benefit. We can deal with the police on your behalf and take away the stress of dealing with situations unfamiliar to you.

I have never been to court before. What will happen when I attend?

The first court appearance is known as a mention. If you engage us, we will appear in court on your behalf. Your appearance may or may not require you to attend, depending on how you were charged and whether the police allowed you to enter a bail undertaking.

If you attend yourself prior to engaging a solicitor, the Magistrate will ask what you wish to do with the matter. Generally, you would advise the court you are seeking an adjournment to obtain legal advice. The Magistrate will enlarge your bail if you’ve already been granted it, or require you to enter bail on your own undertaking. It is important that if the latter order is made, that you do not leave the court before signing a bail undertaking.

Prior to your matter being heard, you will be required to wait until all the solicitors/law clerks have appeared, and then wait for your name to be called. If you engage us prior to the first appearance, your matter will likely be heard much faster, saving you considerable time, so you can get on with your work and other commitments.

Once you have engaged lawyers, you will generally not be required to attend court for most of the procedural appearances. Sometimes, we can even ask that your appearance be excused on the first occasion.

Who is the complainant?

A complainant is the person who the police allege was a victim of the offence they have charged you with. The complainant is not represented by the police or the prosecution, but they will often be in close contact. The complainant will not be required to attend court generally, except if there is a committal hearing where there will be cross-examination, or a trial where they are a witness.

A QP9 is a document the police are obligated to provide which details the facts they believe they can prove, and the evidence they intend to rely upon to prove those facts. The police are required to provide this to you or your lawyers on your first court appearance. We usually request the QP9 as soon as you engage us, so we are better prepared to provide you with advice, and you are informed at an earlier stage of what the police are alleging.

What court will the matter be heard in?

All criminal proceedings in Queensland, with very limited exceptions, commence in the Magistrates court. Depending on the offence you have been charged with, the matter may conclude in the District Court. Matters which must conclude in the District Court will usually take a number of months before they are “committed” there. We can advise you on which court your matter will conclude in during our meeting or you may browse our specific offence pages below.

The complainant attacked me. What should I do?

Self-defence is an excuse/justification in Queensland to some violence related offences, primarily assaults. This means that if your matter proceeds to trial, if available and provided there is some evidence in support of that, the prosecution must prove that you were not acting in self-defence.

The complainant provoked me to attack them. What should I do?

Similar to self-defence, provocation may be available as an excuse/justification to some forms of violence related offences. Once we receive the evidence the prosecution seek to rely on in support of the charges, we can negotiate or make a submission on why they should not proceed. If accepted, the charges may be discontinued. Otherwise, the matter could proceed to trial.

Will I be surprised by my legal bill?

We will make a full disclosure to you prior to our formal engagement of our fees. Depending on your matter and the charges, this may be in the form of an estimated range, or a fixed fee quote. We operate in stages, meaning you will only be required to pay for a certain stage of your matter at a time.

What courts does Potts Lawyers go to?

We have offices in Brisbane CBD and Southport; however our lawyers travel throughout Queensland and Northern New South Wales on a regular basis.

I live far away from your offices. Can we speak over the phone or do a video conference?

Whilst meeting in person has its benefits, we understand this may not always be possible. We can conference via telephone, Skype or Facetime. We will only need your police documentation and a copy of your identification, which can be sent to us electronically. 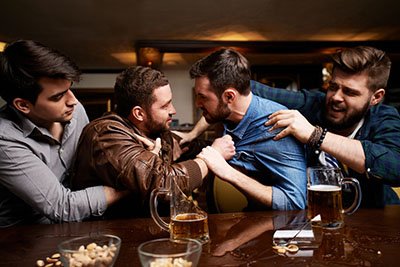 Click below to view the outcomes we have obtained for our clients charged with violence offences.