Legislation before Parliament to give police powers to stop, question and frisk young people in the streets could make our state a scary place for a young person having a night out, and parents need to be aware of what their teenagers might be subjected to.

The proposed new youth frisk powers, on top of existing powers to stop and question people, are a worrying example of ever-expanding police powers. And without having to show that the additional powers are needed or likely to work.

The Police Powers and Responsibilities and Other Legislation Amendment Bill 2011 went before Parliament last month. One of its aims is to give police the power to stop and frisk minors suspected of concealing alcohol.

The legislation was referred to the Legal Affairs, Police, Corrective Services and Emergency Services Committee, which has now called for public submissions on the law.

It is deeply disturbing that the first experience some minors may have with police is a public frisking based on a suspicion they are carrying alcohol.

Trying to soften the issue by calling it a “pat down” skirts real concerns at the emotional impact on minors of being frisked by police in public.

Police are adept at securing more powers in addition to the wide-ranging powers they already possess.

The effectiveness of the proposed powers in reducing crime is questionable, it may have the same result as the use of drug sniffer dogs. Statistics show sniffer dogs are not very reliable at detecting drugs on people. The arrest rate for offences detected by their use is low.

A 2006 report by New South Wales Ombudsman on the use of police sniffer dogs found they were an ineffective tool for detecting drug dealers. Rather, they resulted principally in finding, at best, small amounts of cannabis for personal use. Hardly worth the expense and public inconvenience.

The new frisk powers for minors will be vigorously used at events such as Schoolies and concerts but they can be used at any time.

The new laws might make a night our like going through airport security. Being made to stand arms out and be publicly frisked is embarrassing and could be quite upsetting.

The call for public submissions on the new laws is welcome but earlier consultation would be better.

There is a point at which the inconvenience to the law-abiding public outweighs the benefits of making it easier for police to secure convictions for minor offences.

I’m not convinced of the need for special powers to frisk minors who might have some alcohol in their pocket, when there should be ample evidence of any offending readily available through conscientious use of existing powers by police. 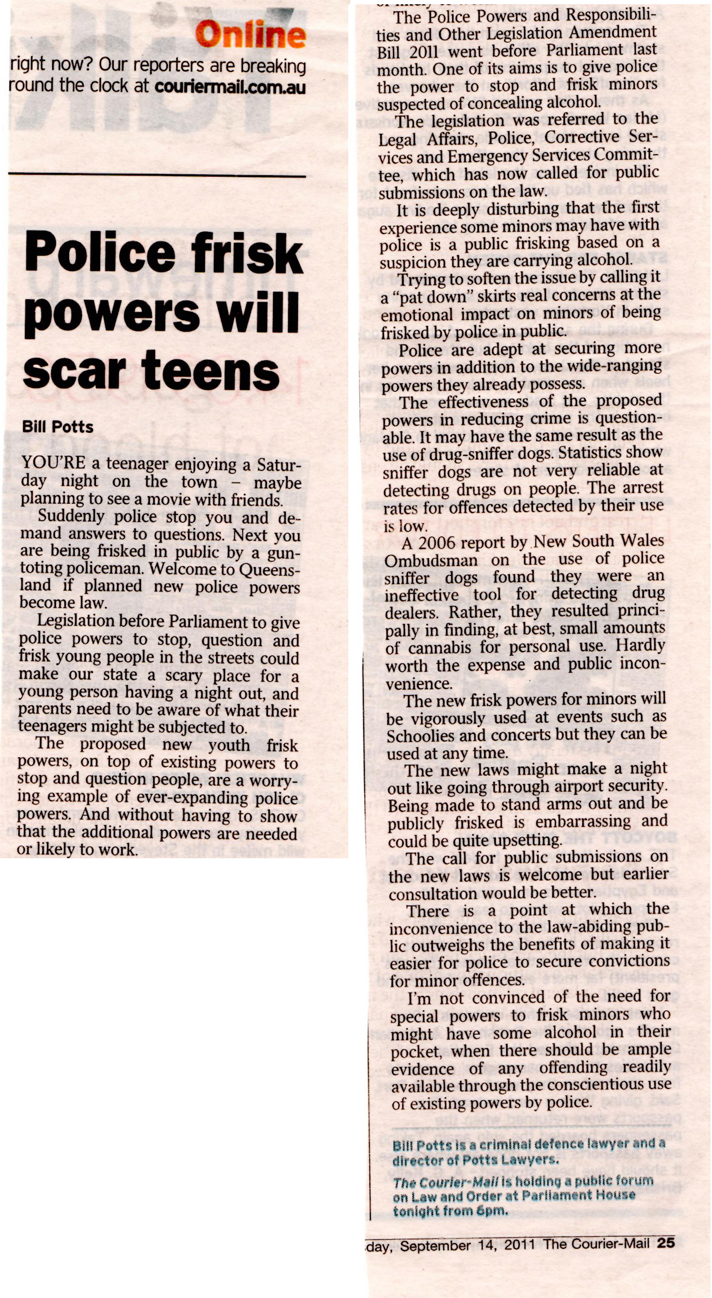