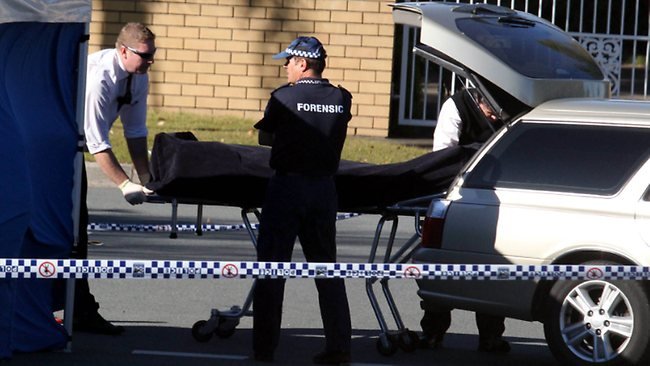 VIOLENCE: The crime scene at the third in a spate of recent Gold Coast shootings which the Queensland deputy premier has said is linked to organised crime. Picture: Mike Batterham Source: Gold Coast Bulletin

THE latest victim of the Gold Coast’s Underbelly-style crime wave may have been executed as revenge for sex crimes.

Police are believed to be investigating whether the victim, 36, was involved in crimes including child pornography.

They have not ruled out bikie gang or organised crime links.

The man was slain on one of the city’s busiest roads early yesterday in the Gold Coast’s third fatal shooting in less than two months. It is believed he was shot in the back.

The killings and a spate of other violent gun crimes have reinforced fears the strip is being over-run by armed thugs and crime gangs, despite police calls for calm.

An intruder bled to death in a Gold Coast hinterland street after being shot by a resident last week, while Gold Coast police officer Damian Leeding was slain during a hotel robbery in May.

But while senior police insist the Coast remains safe, residents have voiced fear at the rising violence.

The police union said shootings and serious crime were a weekly occurrence and “no one is safe”.

Yesterday’s shooting came as the State Government admitted it had slashed funding to the Gold Coast police district by $11 million last year.

Mayor Ron Clarke called for a zero-tolerance approach to crime on the Coast but Police Minister Neil Roberts said while there was “great concern”, police were responding.

Regional crime co-ordinator Superintendent Dave Hutchinson expressed concern at the spate of gun crimes but said most were committed by “specific groups” and the public should not be alarmed.

“Every day, we have thousands and thousands of people attend the Gold Coast. They come for the day and they leave without being confronted by any crime whatsoever,” Supt Hutchinson said.

“I would reassure the public that the average member of the public shouldn’t be concerned and we are putting as many resources as we can into finalising this matter.”

“It’s become a sunny place for shady people,” he said.

“The place is awash with drugs and more and more people are packing guns.”

Former Gold Coast mayor Gary Baildon, whose family has lived on the Coast for almost 70 years, said he was disgusted at the crime hot-spot his city had become.

“The shortage of police on the Gold Coast is an absolute disgrace and I’m disgusted at the State Government for allowing this to happen,” he said.

Mayor Clarke said the Coast should follow the lead of New York and adopt a zero tolerance to crime but this would need State Government support.

Residents living near the murder scene said they were shocked and frightened at the rising tide of violence, including the slaying of police officer Damian Leeding during a hotel hold-up on May 29.

“It’s getting beyond a joke now isn’t it?” elderly widower Jesse Gorham said.

“There’s not enough punishment for minor crimes and then it snowballs.”

Another elderly resident, Brian Blanchard, said it was horrible to wake up and see the man’s body in front of his house.

“It’s getting pretty frightening out there,” he said.

Service station worker Daniel Baddour said police woke him at 4am to ask him if he had heard or seen anything.

“They said to me ‘somebody’s been murdered out the front’ … I was very shocked,” he said.

Earlier this month, an intruder bled to death in a Gilston street after being shot by a resident.

This week, a man was arrested at gunpoint at a Robina tavern after allegedly brandishing a loaded semi-automatic pistol in the bar.

“Gold Coast police have been under-resourced, under-staffed and overworked for too long and the rubber band can only be stretched so far,” he said.

Revelations that the State Government had slashed the region’s policing budget would only make conditions tougher.

He said a new Gold Coast-based violent crime squad set up after Sen-Constable Leeding’s murder was getting results.