No jail time over senseless death

No jail time over senseless death 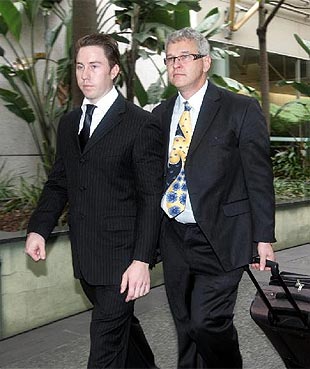 ONE of the witnesses said it himself — put testosterone, alcohol and the early hours of the morning together and nothing good was ever going to come of it.

A jury yesterday acquitted Elanora graphic designer Mark Leslie Fitzgerald of manslaughter, but it came after years of “hell” for all involved with a group of young, drunk men who got into a fight outside the Big Chief burger shop at Coolangatta on Father’s Day, 2009.

Fitzgerald, 23, pleaded not guilty to unlawfully killing Andrew Houlahan, of Pottsville, by punching him in the head during a fight in Griffith St about 2.30am on September 6.

What sparked it seemed to come down to a spray of verbal insults traded inside the burger shop as Mr Houlahan, 23, and his two friends passed Fitzgerald and his mates.

All had been drinking for hours.

Some witnesses said it started with Mr Houlahan’s friends calling Fitzgerald’s group “faggots” and “emos” for the way they dressed in tighter pants.

Before long one of Fitzgerald’s mates threw a punch at one of Mr Houlahan’s friends and a messy group fight flared.

Lawyers for Fitzgerald raised self-defence and accident, telling the jury in the Supreme Court in Brisbane to look at the CCTV footage of the “dynamic” brawl that ended when Mr Houlahan slumped to the ground and never got back up.

Mr Houlahan died from irreparable brain injuries in hospital later that day as his family made the decision to turn off life support.

During the trial the Crown argued Fitzgerald had no need to punch Mr Houlahan and a reasonable person would have foreseen that his actions could have ended in death.

The jurors were told to ignore the One Punch Can Kill campaign, and instead focus on the facts.

They returned a not guilty verdict. Outside court defence solicitor Bill Potts said Fitzgerald wanted the case to be a lesson to others.

“Can I simply say this, there are no winners,” Mr Potts said.

“Mr Fitzgerald is, ah, pleased, but at the same time he is very concerned that a lesson be learnt and a message be sent and that is that one punch can kill and one simple moment of stupidity can lead to a lifetime of regret.”