Posted by Genevieve Bowen
in Uncategorised

It is important to be aware of how to correctly handle neighbourhood disputes, ensuring that you are pursuing matters in the correct forum, for example, is the matter best suited for QCAT or the Magistrates Court, or should a mediation be facilitated between parties.

It’s important to understand the options available to you, through seeking appropriate legal advice that is specific to your matter. 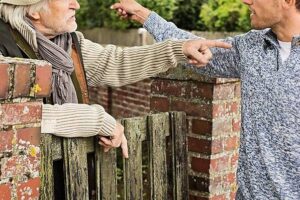 For tree disputes, QCAT can make decisions on recovering debt for overhanging branch removal, or other matters involving trees causing property damage, interfering with the use of land, or causing injury.

Dividing fence disputes are commonly over the type of fence required or the cost of the fence and how much each neighbour should be contributing, and/or whether a common boundary requires a fence.

QCAT can decide on fence disputes valued up to and including $25,000, or for matters involving a dividing fence that is part of a pool barrier, the amount is unlimited.

You can find more information about QCAT on their website: https://www.qcat.qld.gov.au/.

A party may institute proceedings in the appropriate court, if they have a legitimate cause of action that is not merely a vexatious claim or a claim with no prospects of success.

Common civil law causes of action in Neighbourhood disputes (although not limited to) are claimed under the following torts;

These are ‘civil wrongs’ which may give rise to remedies such as financial compensation if a claim is successful. Whether you are seeking to bring a claim, or seeking to defend a claim, the civil litigation law team at Potts Lawyers are highly skilled in all areas of civil proceedings and available to assist you.

An application for a Peace and Good Behaviour order can be made when a person threatens to assault or cause bodily harm to another person (or someone in their care) or threatens to destroy or damage their property, and as a result the person receiving the threats is in fear.

Applications can also be made if threats are to have someone else injure a person or property. Once an application is made, parties are required to attend the Magistrates Court, where the Magistrate may make a Peace and Good Behaviour Order or refer the parties to mediation. Pursuant to section 11 of the Peace and Good Behaviour Act 1982 if a person breaches a P&GB order, they are guilty of an offence under the Act, which (as at the date of this article) carries a maximum penalty of 100 penalty units or 1 year’s imprisonment.

Ultimately, some neighbourhood disputes may be matters for the police, especially if they become violent and dangerous to one’s safety and wellbeing.

You have the option to attend your local police station to make a police complaint and provide an account of what happened. If at any time you feel that you are in a life-threatening situation you should immediately call the police.

The Coleman and Bicknell families had a bleak end to their neighbourhood dispute that had been ongoing for just under 10 years. The matter began over a claim for nuisance due to the noise of some backyard windchimes, catching the interest of many, including ‘A Current Affair’. Late last year in the Queensland District Court, His Honour Judge Nathan Jarro dismissed the claims of both parties with no order made as to costs, stating that ‘as is apparent from the facts and evidence of this case, these proceedings should never have been brought to trial at all’.[1]

You are probably wondering how a disagreement over windchimes ended up in a decade long legal battle. The plaintiff, Mr Coleman, originally sought an injunction from the Court to prevent a nuisance. The nuisance was argued to be caused by the noise of windchimes that were in the Bicknell’s (defendant’s) courtyard, which adjoined the plaintiff’s property. The plaintiff’s pursuit for an injunction was no longer necessary when the defendant’s moved out of the property. As for the windchimes, they had been glued together and cut, preventing further noise.

Unfortunately, this was just the beginning of expensive, protracted litigation proceedings, with a spree of ongoing allegations arising from both parties. The defendants made a complaint against the plaintiff under the Peace and Good Behaviour Act, alleging that there had been threats of assault, however this was dismissed in favour of the plaintiff, Mr Coleman.  Following this Mr Coleman made a claim for Malicious Prosecution, seeking $35,000 in damages which included general damages for the stress, emotional distress and embarrassment suffered in responding to complaint.

The Bicknell’s submitted a counterclaim alleging that the Coleman’s made verbal and physical threats, caused private nuisance, such as load music, yelling, banging on windows, and trespassed onto their property to tamper with the wind chimes, throwing eggs at their house and knocking over their bins. The counterclaim sought over $300,000 worth of damages.

With both parties being unsuccessful and having their claims dismissed, this case is a clear example of a neighbourhood dispute that should never have progressed to the District Court. The reason for this was examined by His Honour Judge Jarro, when he discussed the credibility and reliability of the evidence of each party, all of whom were noted to have engaged in conduct that reflected poorly on them.[2]

The allegations of both parties were serious in nature and required strong evidence before the court. The test in Briginshaw v Briginshaw (1938) 60 CLR 336 was applied, whereby the court must have reasonable satisfaction on the balance of probabilities that the allegations had been proven. His Honour discussed the flaws in each party’s case which ‘casted doubt on the credibility and reliability of evidence’. Inconsistencies around the location and number of windchimes, inconsistent photographs and deliberately evading questions during cross examination, were just some of the flaws. His Honour decided that the reliability and credibility of both parties was not enough to act on their evidence alone, as they each had vested interests in the matter, and ultimately further independent or objective evidence corroborating the allegations was required.

Windchimes aside, there are aspects of the Coleman v Bicknell matter that many can relate to. Neighbourhood disputes can spiral out of control, what may start as a simple disagreement over noise, a boundary, or parking, can lead to arguments with physical and/or verbal abuse, intimidation and stalking, trespass, back and forth videoing of one another, property damage and even cyber bullying. Feeling unsafe in your own home, constantly being on edge, brings up a range of issues and emotions. These matters can be mentally, physically and emotionally taxing.

In the words of His Honour Judge Nathan Jarro ‘Neighbourly relations can be fraught and fragile, and it is a pity when people cannot just be adults and get on with it’.[3] Matters may be resolved without intervention, through effective and open communication, respect, and compromise from both sides.

However, in matters which have tipped past the point of reaching a resolution, and have appropriate cause for the court’s intervention, the right legal advice can make all the difference.

This article is a guide and should not be considered legal advice.